By David Park and George Wahlers

Regulatory modifications in 2010 have raised important issues in design and use of industrial safety systems. Certain changes in IEC 61508, now being widely implemented, mean that designers and users who desire full compliance must give new consideration to topics such as SIL levels and the transition from 1H to 2H methodologies.

In particular, these issues can impact users’ selection of solenoid valves and prepackaged redundant control systems (RCS) for implementation in a safety instrumented system (SIS). Such selections may also be affected by how experienced valve suppliers are at dealing with complex new compliance methodologies.

These issues are especially applicable to the oil, gas, chemical, and power industries — in applications such as safety shutdown systems, boilers, furnaces, high-integrity protection systems (HIPS), and more. They’re of concern to safety engineers and reliability engineers, as well as to process engineers, engineering executives, and plant managers.

This report will address these issues in developing a compliant SIS using valves and RCSs. Making the right choices in safety system planning and in valve supplier selection can affect design time, costs, and effort — as well as the safety of the plant itself.

Every industrial plant must be concerned with risks to its safety, and to the mitigation of those risks. Safety of process components continues to be of critical importance in light of periodic industrial disasters such as Buncefield, Deepwater Horizon, and the November 2013 oil pipeline explosion in Qingdao, China.

Such events naturally draw media attention, and often increase regulatory pressures on all operations. In plants that actually suffer these or even lesser safety incidents, consequences can include the trouble and costs of process downtime — as well as the para mount considerations of harm to employees, the community, and the environment. Thus planners at all industrial process operations must avoid complacency on safety issues.

IEC 61508, titled “Functional Safety of Electrical/Electronic/Programmable Electronic Safety-Related Systems,” is the accepted international standard that guides selection of components for industrial safety systems. Its latest revision, explained below, was issued in 2010.

However, certain provisions of this standard — especially Route 2H, — are only now becoming widely implemented. In fact, engineering groups at numerous process manufacturers are currently wrestling with complexities arising from these issues as they evolve fresh approaches to adjust to the new standard.

Note that the technicalities may be daunting, as this report itself demonstrates. An extensive selection of specialized concepts and terms are introduced here (plus their accompanying initialisms, from SIS, SIL, and SIF to PFDavg, FMEDA, and FIT). All of these are used in determining correct compliance. Their number and scope give some indication of the difficulties facing professionals who may not be well versed in this area of safety practice.

Thus many designers and safety engineers tackling these changes find it helpful to consult a knowledgeable solenoid valve supplier. They report that their supplier’s experts can help deliver welcome savings in schedules and cost. This allows engineers to devote more attention to other critical parts of the project.

The safety engineer faces numerous challenges in designing an efficient SIS for a given plant process. He or she must decide what technology should be selected, what level of risk reduction must be achieved, what architecture is appropriate for the given control system components, and what testing is required to reach the system’s desired safety integrity level (SIL). System development includes how frequently diagnostic test are performed both manually and automatically and is important because frequent testing may mean system downtime.

In particular, when selecting crucial technology such as solenoid valves, the engineer must begin by considering three factors:

Once the SIF is designed, SIL verification calculations determine if it will provide the desired risk reduction. For example, the safety engineer may use the following simplified formula on a single-channel, one out of one (1oo1) SIF with proof test coverage to determine if the PFDavg meets the desired SIL level: 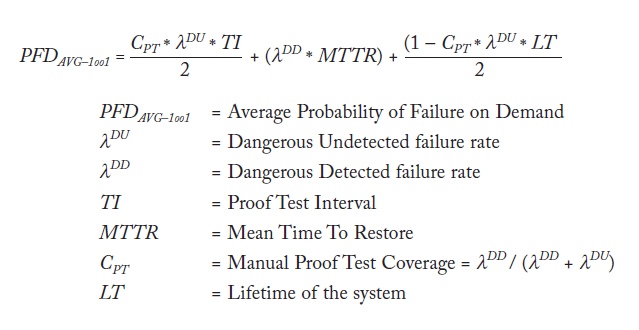 Consideration of certification is the next step. Devices such as solenoid valves are categorized as type A devices — “non-complex” mechanisms that possess discrete elements according to IEC 61508 (2010).

Certification begins with a failure mode effect and diagnostics analysis (FMEDA). This analysis determines the failures in time (FIT) rates “λ” for different types of failures: safe detected, safe undetected, dangerous detected, and dangerous undetected. Once these rates are established, the safe failure fraction (SFF) and PFDavg can be calculated: 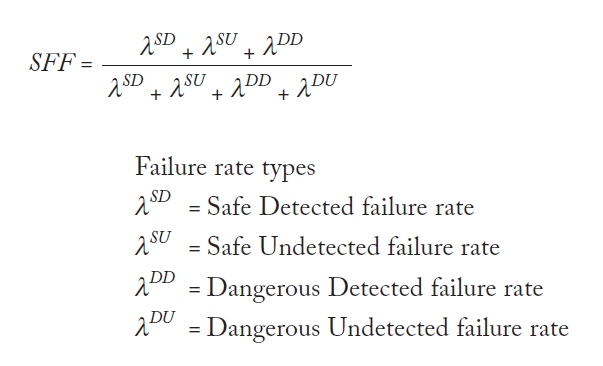 IEC 61508 allows two routes to determine a solenoid valve’s SIL capability. The traditional Route 1H uses FIT rates to calculate a safe failure fraction (SFF) for the given valve. The SFF can then be used to determine the HFT, which in turn can establish the level of redundancies required in using this valve, and can show what SIL level the safety function utilizing this valve would attain.

As part of an effort to reduce ambiguity in failure type definitions, for its 2010 release IEC 61508 altered the SFF formula used in Route 1H. Briefly, “no effect” failures are no longer a component of safe failures.

This change usually produces a lower SFF in the formula above. If the SFF values drop below certain thresholds as shown in the table below, a higher HFT than before is required to achieve desired SIL levels. For example, a valve with an SFF of 75% would be SIL 3 capable with an HFT of 1. But if the SFF dropped below 60%, the valve would only be SIL 2 capable with that same HFT of 1. 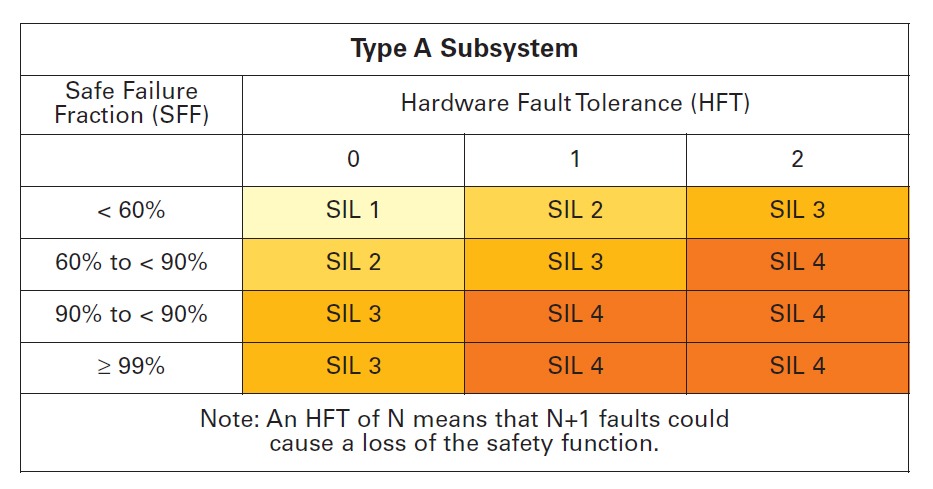 Another major change in the 2010 release of IEC 61508 was the introduction of Route 2H. This began the process whereby some certifying agencies are phasing out Route 1H approaches for evaluation of final elements (solenoid valves, actuators, ball valves, etc.).

As with Route 1H, failure rates (λ) are first determined via lab testing or FMEDA calculation. But instead of SFF and HFT, Route 2H uses the failure rates to determine PFDavg and HFT for SIL capability.

And perhaps most importantly, Route 2H affirms the failure rates with historical information — actual customer field return data on component reliability. In fact, Route 2H can only be applied if there is sufficient field data to support the failure rates used in the PFDavg calculations and that a valve is proven in use. If so, this data can be used to determine SIL levels.

How is that historical data obtained? It’s most often available when dealing with a supplier who has received validation from leading independent global safety certification sources, such as Exida or TÜV. Failure rates for numerous ASCO parts and components are supported by data collected by Exida arising from literally billions of hours of operation.

The paramount advantage of using Route 2H: its higher confidence level. This refers to the statistical probability that the actual failure rate — λactual — will fall between the limits λ5% and λ95% (which are at the higher and lower edges of a bell curve, respectively). While Route 1H usually exhibits only 70% confidence, Route 2H typically achieves 90% — promising a 90% certainty that the predicted failures will occur as expected. This higher confidence is possible due to the support of calculated failure rates by actual field return data, and the ability to take more uncertainties into account.

Note that Route 1H will still be used for electronic or other complex devices, programmable systems, and other devices incorporating diagnostics. Route 2H is applied to simple or mechanical products such as valves and other final elements.

Nevertheless, industry-wide acceptance of the Route 2H method has been growing steadily since it was first implemented. Agencies such as exida use the Route 2H approach for both new and renewed certifications. Some customers have been understandably hesitant to adopt it because of existing investments in their systems using Route 1H. Fortunately, changing from the 1H to the 2H approach makes little or no difference in certification. We recommend that users become familiar with Route 2H and understand its significance.

For the safest system design, selecting the right solenoid valve supplier may be as important as any of the technical choices discussed above.

Solenoid valves are too critical to be purchased as mere commodities; avoid vendors who emphasize the lowest price alone. Look instead for a supplier that’s deeply involved in safety issues, understands what’s involved in setting up a safety system, and has comprehensive resources to provide technical support.

Safety certification of valve components can involve considerable complexities for the supplier. Gravitate toward suppliers who have taken the trouble to obtain such certification — and who are validated by independent sources. ASCO possesses the world’s widest variety of SIL-certified pilot valve solutions. Many of these products have certifications from both Exida and TÜV international agencies.

Ask the right questions. When you’re evaluating products for an SIS, does a given supplier furnish your required level of local/international service/support? Does it provide a comprehensive selection, so you can find precisely the products you need?

Safety is a critical requirement for most if not all industrial plants. It’s vital that users keep up with new developments in regulation and technology within this fast-changing field. This is particularly true of the ability to make informed decisions on issues such as compliance with IEC 61508, consideration of SIL levels, transition from 1H to 2H, and selecting solenoid valves.

An experienced solenoid valve supplier that’s knowledgeable about these issues can serve as a valuable resource for advice and information. Users who stay informed can ensure compliance and improve savings and process safety